As summer is very quickly approaching, we figured we’d squeeze in one last bit of spring cleaning.

Our staff list is a bit overdue on a clean. We’ve been a bit slow to remove those of our team that have decided to move on from ShoutWiki, for various reasons.

We’ve said goodbye to Lynton, Solar Dragon, Pinky and Jedimca0 all of whom gave up ShoutWiki due to other personal commitments a number of years ago.

Unfortunately, Richard Cook (Cook879) has chosen to resign due for personal reasons. Richard has been our face to the community for a long time and his presence will be hugely missed by everyone. You may have noticed Richard reduce his activity in February, and has been working with us to handover since then. Today we finalised the last of this, and we’re announcing this change.

We would like to thank all of these amazing individuals for the time and effort they have put into ShoutWiki.

We’d like to introduce you to the newest member of our team – Samantha Nguyen. Samantha will be filling a small part of the hole left by Richard. You’ll primarily see Samantha answering tickets and dealing with spam as part of our Community Support team, however you may also notice her on Phabricator dealing with design and user interface issues, or editing on Brickipedia.

Samantha is based in the US and helps us respond in more timezones.

Please hang with us as we get Samantha up to speed with the huge challenge that is supporting our amazing communities. 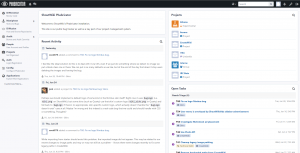 Phabricator is a powerful open source system initially developed by staff at Facebook. We originally moved to Phabricator in 2015 to take advantage of the set of repository hosting tools that are included within the software.

Our move was prompted by the Wikimedia Foundation’s adoption of the software who are also using Phabricator as their bug tracking and code hosting system.

As some users have noticed, our old bug tracking system, powered by Bugzilla has been down for a considerable amount of time. Bugzilla was written in a mix of Python and Perl, whereas Phabricator is written primarily in PHP, the same language as MediaWiki. Over time, Bugzilla has become increasingly hard to maintain with our current software stack, and when we migrated many of our backend tools to our new server in, we made the decision that it was time to migrate to Phabricator.

One of the key features we are excited about in the bug tracking software is the ability to assign multiple projects, whereas in Bugzilla a bug could only be filed under one component and product. A task may be filed under various projects where it affects different features.

Phabricator accounts are currently independent of ShoutWiki.com user accounts, and you can create an account using your email address and password or using a Google or GitHub account. We are currently attempting to implement the MediaWiki OAuth handler developed by the Wikimedia Foundation so you can link your ShoutWiki account with your Phabricator profile.

The Phabricator software is designed to be modular adding different modules for different aspects of functionality. Maniphest is the bug and task tracking module in Phabricator and has a simple interface for filing a bug. When submitting a task, you only have to submit a title and a description which can all be amended later. The projects box can be filled in if a particular feature is causing you issues and will auto-complete project names for you. 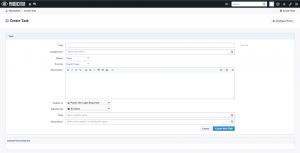 You can securely find Phabricator at https://phabricator.shoutwiki.com.

If you have any questions or issues with Phabricator, you can find us on the Freenode IRC network in #ShoutWiki, email support@shoutwiki.com or comment below.

ShoutWiki, an open company, is known for its unique, innovative features and the ease of use, which has been achieved by using MediaWiki, the same software used by Wikipedia.

Learn more about ShoutWiki and its history, contact the staff or come say hi on IRC!